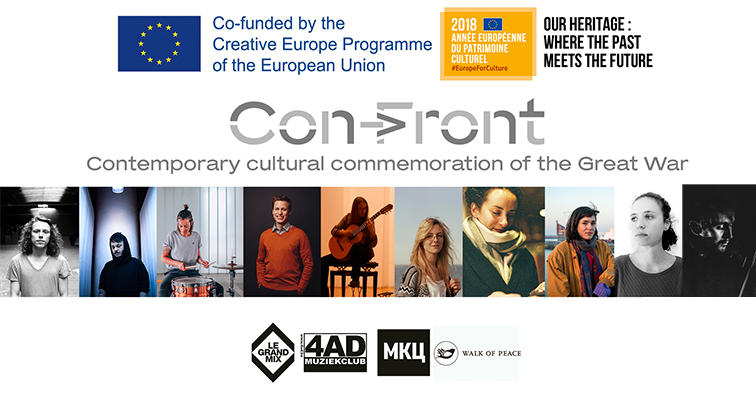 The First World War was the first military conflict in human history on a global scale. Worldwide over 100 nations got involved of which 24 European. Its outcome defined the landscape, economy, identity and demographics of continental Europe. The historical frontline went from the North Sea, over the Balkans to the Gallipoli archipelago and connects Europeans in one symbolical line. Moreover the First World War uprooted millions of European civilians, most of whom were innocent bystanders, creating the first massive European refugee crisis ever. War migration has repeated itself over and over during the last 100 years. A better comprehension of the past is essential to understand the present.

CON-FRONT wants to raise awareness on this common European legacy through a unique international cooperation between contemporary music venues and heritage partners. The partnership will examine new ways of commemoration through previously unexplored methods, accumulating the specific expertise of both cultural and heritage sectors and confronting past with present.

The partnership spreads from Belgium, France, Slovenia to FYR Macedonia, connecting a large part of the different continental European war fronts. Its main outcome is a cross-border multidisciplinary creation of a group of young international artists (pop / rock musicians, visual artists), staged in the participating countries for a diverse and hard to reach audience and a cross-border documentary of international young film makers capturing the whole creation process and its result.

Furthermore dissemination of the project and its content is planned through alliances with a wide range of music-related and historical conferences and symposia and WWI commemoration events. A jointly-written online methodology based on the project’s experiences and results will serve as a sustainable manual for other European organisations, looking for new ways to interpret or commemorate a historical legacy through artistic creation.
(Source: EAC.)