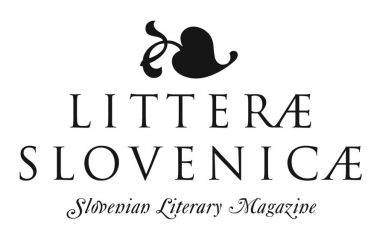 The LS project aims to independently present Slovene literature, Slovene literary life and Slovene culture in general to readers abroad. LS project provides, with the translations of Slovenian authors from lees-used Slovenian language into all the major, well-used languages of EU, the accessibility of Slovenian Literature and Culture to a non-national audience and stimulates the interest for further translations. The aim of the project is to protect and promote the Slovene and hence EU’s cultural and linguistic diversity and cultural heritage, to promote the transnational mobility of the authors as well as the circulation of translated literature with the aim of not only reaching a new and wider readership for the Slovenian literature but to keep the readership interested in a high quality Slovenian literature in a long term. The project aims to reach new and wider readership directly- live presentations of the books by authors and translators and indirectly- trough mediators for a wider audience: book fairs, literary festivals, literary critics, publishers, literary agents, foreign language programs, universities, libraries, cultural centres, embassies etc. (Source: EAC.)

In 2015, the Slovene Writers’ Association, with the support of the European Commission, began to implement the project Litteræ Slovenicæ: A Small Literature in Major Languages, in the framework of which the web portal https://litteraeslovenicae.si/ was created. Aimed at foreign readers, this portal includes information on all the translated books as well as on the authors and translators. In Blackberry Heaven, a young woman named Jana, who comes from the Slovenian countryside, finds herself in Amsterdam, where she meets Bepi, an old man from eastern Italy who sells live fish at a flea market. They each carry within them a number of spinning, intertwining stories that create a mixture of situations that are by turns funny, peculiar, unpleasant, fairytale-like, and romantic. These stories flow through village figures, urban adventures, and mystical dialects toward a river outlet that which is at once also a new source. Thus, the story of this “river novel” never ends, since the ending of the novel is at the same time its beginning. Nataša Kramberger’s Blackberry Heaven is enlivened with careening rhythms and onomatopoeia. It provides a full-blooded portrayal of the characters in Jana’s hometown, which serves as a contrast to Amsterdam, that city to which the mysterious paths of fate have led everyone from a Surinamese woman working at a cybercafé to the biracial child whom Jana babysits. All find themselves in a city where throaty Dutch names resound even as the memory of Jana’s native Slovenian dialect remains. Nataša Kramberger is known for her use and mastery of many linguistic registers, proving again and again her remarkable storytelling and linguistic prowess. Veronika Dintinjana: Rumeno gori grm forzicij
Yellow Burning Bushes of Forsythia (D: Gelb brennt der Forsythienstrauch, 2020; SI: Rumeno gori grm forzicij, 2008), Veronika Dintinjana’s first collection, is one of those rare debuts that not only shows promise but that seem as if it was written by an experienced author – both in terms of writing and life experience – and not by an author who had just entered her third decade. Shortly after the publication of this book, Veronika Dintinjana’s was recognized as one of the best of the young generation of poets, and she remains a central name on the contemporary Slovenian poetry scene. Her poetry affects us on several different planes. However, not recognizing one or the other reference does not detract from the pleasure of reading her verse. The main theme of Veronika Dintinjana’s poetry is time, its passing, its flow – she says that she writes poems about how time is always eluding us. These are poems that are written with surgical precision but at the same time that function with great naturalness and suppleness – whether the poem implies a broader background, often a mythical landscape, or whether the poem is interwoven into an arch of associations. Reading Veronika Dintinjana’s poetry is a profound, fulfilling but also inexhaustible activity.

Sebastijan Pregelj: Kronika pozabljenja / A Chronicle of Forgetting
Every morning the memories are a little different. The world of Sebastijan Pregelj’s novel A Chronicle of Forgetting is governed by dementia. In his previous novels and stories Pregelj has taken us to incredible, fantastic worlds, to worlds of the past, and once even into space, but the most incredible world is the world hidden in the human brain. Here, he gives us a remarkable, deeply humanistic story about pondering life and looking for meaning, for that happiness which we do not know how to find in the privileged part of the world and which people from other continents would like to have, but most of all this is a novel about accepting the end of life. It speaks of last things with a light that inspires and awakens. Pregelj is a writer with a keen ear for a story, for structuring plot, for gradual intensification, and for unexpected, sometimes extremely minute, but never unimportant reversals. He confirms anew that he is in command of his craft and one of Slovenia’s finest writers. 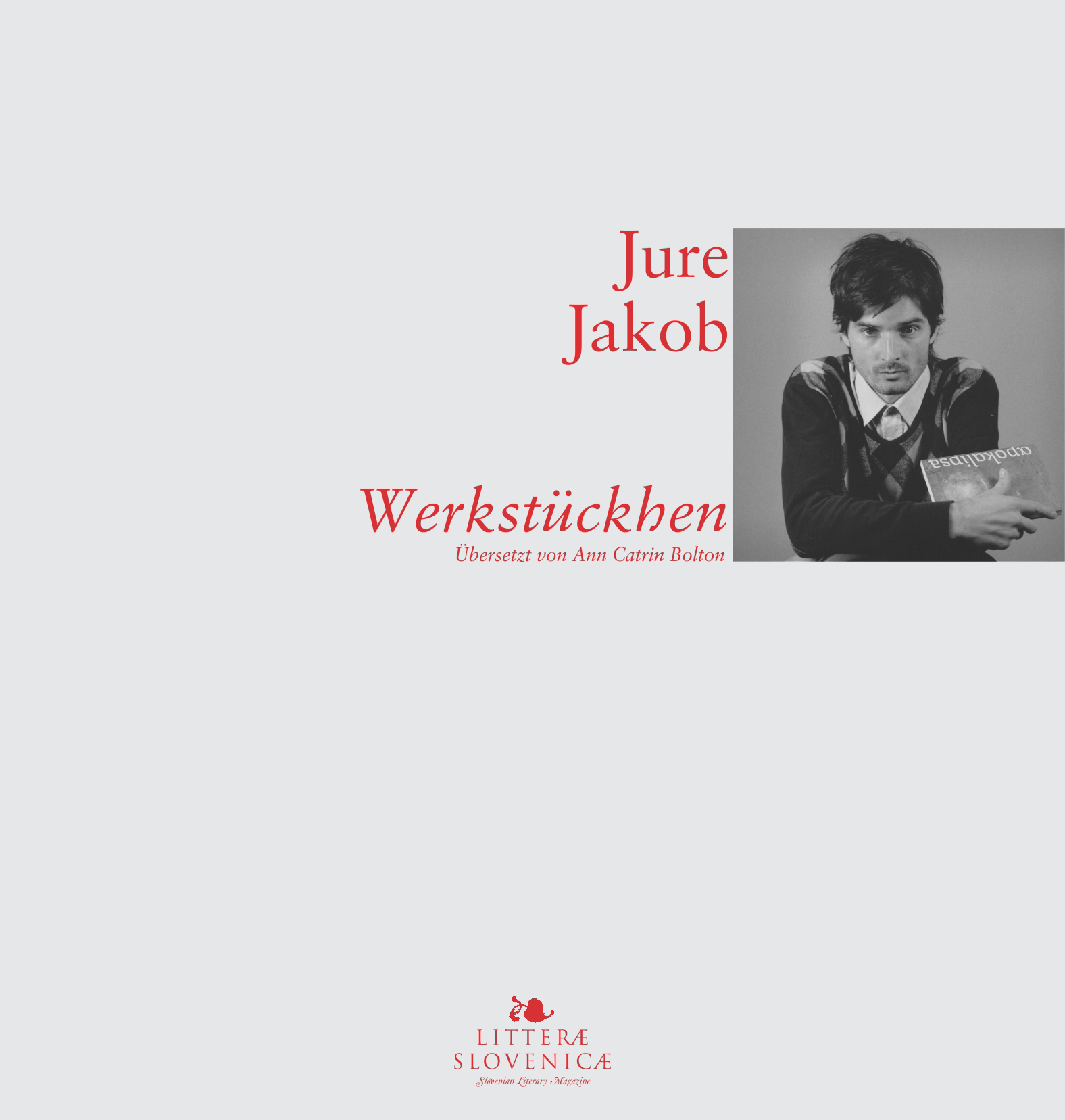 Jure Jakob: Delci dela / Werkstückchen
Fragments of Work (Werkstückchen, 2019) is the fourth poetry book by Jure Jakob, a prominent Slovene poet. The author is mainly interested in existential and poetic issues, but what leaves a unique stamp on his poetry is the peculiar detachment of his speaker. Jakob’s poetry is permeated by an awareness that words and names never call into being what they evoke: without a solid base in the world, they merely circle round. That is what maintains the world’s mystery and the alienation of Jakob’s speaker despite his awareness that he is part of a larger whole, as neatly suggested by the title Fragments of Work. What is further reflected in the title is the concept of work, prominent in his poetic oeuvre. Unsurprisingly, the flap of the original book displays the lines: ‘I like to work / at the needful.’ Those lines are brief and compact, a feature not found in his earlier collections (his debut was followed by Wakefulness – Budnost, 2006, and Abandoned Places – Zapuščeni kraji, 2010). And while this feature is most pronounced in the Fragments of Work cycle, which gave its name to the entire collection, the verse in Jakob’s latest book as a whole may be described as somewhat terser and still more laden with meaning.

In the “Cankar year” of 2018 – where Slovenes are celebrating the 100th anniversary of Ivan Cankar, Slovenia’s greatest and also first professional writer – Litteræ Slovenicæ published Podobe iz sanj (Images from Dreams), Cankar’s final collection of short stories and sketches. The special edition includes reproductions of paintings by Mitja Ficko. Cankar has been engaged through translation, essays and paintings by representatives of younger and middle generations of Slovene artists including Erica Johnson Debeljak, Jasmin B. Frelih, Mitja Ficko, Katja Perat and Robert Simonišek. At the same time, the book is a premium product from the award-winning designer, Pavla Bonča. See more at Litteræ Slovenicæ.